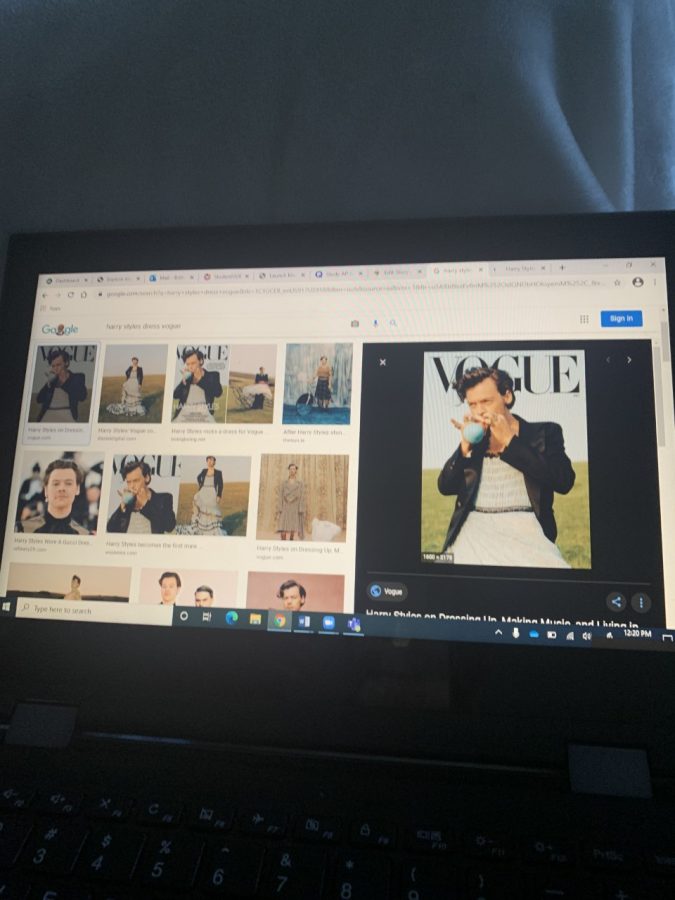 After Harry Styles was seen in Vogue wearing women's clothing, a lot of controversy arouse.

Fashion publication US Vogue made history by featuring British pop singer Harry Styles as its first ever male cover star. The cover immediately sparked passionate conversations around masculinity and gendered dressing. Harry wore a voluminous periwinkle blue gown with a black tuxedo jacket designed by Gucci. The image felt representative of a growing exploration of gender-fluidity and non-binary dressing taking place, popular among the very millennial and Gen-Z shoppers Vogue is targeted towards. However,  a lot of conservative  people disagreed with it saying many hateful things about Styles and his taste in style, but this isn’t his first rodeo in bold fashion choices.

The singer also wore a black dress by the Japanese brand Commes Des Garçons on the cover of the Guardian Weekend and when the people spoke out about it, he was quick to defend his outfit by saying: “I’m not just sprinkling in sexual ambiguity to be interesting,” he said. “I want things to look a certain way. Not because it makes me look gay, or it makes me look straight, or it makes me look bisexual, but because I think it looks cool.”

After Harry Styles spoke on his view on fashion and his style preferences and how he feels about all of the unnecessary attention, he finally received some encouragement from several Hollywood stars. For example, Olivia Wilde, who directed a Styles-led film, replied to a backlasher’s tweet with, “You’re pathetic.” And “The Good Place” actress Jameela Jamil tweeted out in Styles’ defense saying, “Manly is whatever you want it to be.”

Personally  I do not mind Harry Styles choices in fashion or his own personal style. I think that there is so much gong on in the world in todays times, why should we focus on a man in a dress when we have life threatening things happening all around us, such as the Corona Virus, wildfires, social injustice issues and the overall wellbeing of our country. I think we Americans, and especially today’s toxic pop culture, should take a step back and view the world in a different prospective, and try and spread awareness for the real things effecting our country instead on focusing on things that should not affect us. 2020 has been a hard year for everyone, and so many personal battles have been fought but somehow, one of the only things being talked about in articles and in social media is celebrities and their fashion choices.