The Reopening of the Curtain

Broadway is finally back! 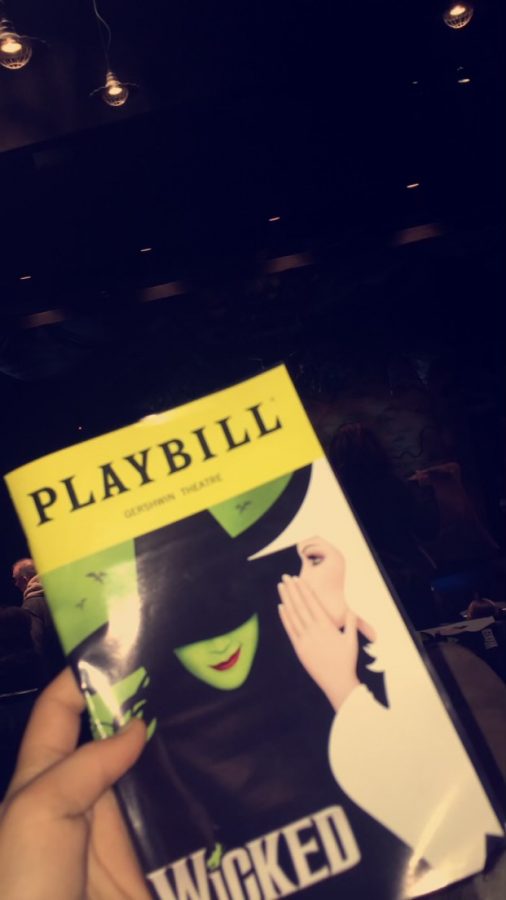 The brochure from the musical Wicked.

Since the lights turned off and the curtain fell on March 12th, 2020 due to Covid-19, New York City has not shinned as bright. Although it might not seem the most important closure when looking back at the shutdown, the temporary closing of Broadway and the show business industry has changed the lives of many. After 18 months, on September 14, 2021 the musicals are coming back–hopefully for good this time. However, with the Delta variant of Covid-19, staying open may be an issue. Broadway, New York and the whole world is waiting for you!

During the dark time, many things were lost. This included money, audiences, actors, back-stage crews, directors, producers and equipment. According to thewrap.com, the estimated loss of revenue could have been as much as 565 million dollars. This breaks down to a loss of 35 million dollars per week.

The losses didn’t come only from lack of new sales during the shut-down.  Broadway also had to refund all the shows that had been booked months in advance, which most people decided not to rebook. It was a major decrease in business and it will take years to recover from it.

For the actors and actresses, the internal struggle of what to do in this situation was brutal. For example, Trista Moldavan, an actress from Phantom of the Opera, had to come up with a separate plan for how to stay on her feet without a steady income coming in. This has happened to many casts and their crews.

With the virus still in the picture, the process of getting back in business will not necessarily be easy. To go and enjoy a show, you will have to be fully vaccinated and wear a mask the whole time. If you are not willing to wear a mask, there is no point in making the trek through times square, but most die-hard fans believe that it is worth it. According to the New York times, there will not be any social distancing seating due to the loss of revenue. It might come as a surprise that theaters are choosing not to space the seating out, but they cannot afford losing any more seats and customers. With the plays coming back so soon, the actors are hoping their performers are better than ever to keep crowds wanting more.

There are many mixed emotions among fans right now, especially with the news that Broadway is back. Some fans are super excited while others may be hesitant to even set foot in a crowded setting. When asked whether she would go to a Broadway play in the beginning of opening, Skylar Smith, a theater fanatic and LHS Senior, responded with, “I was a little disappointed to hear that there will be no social distanced seating, but knowing that everyone there will be fully vaccinated and masked has a made me feel a lot better and I will be attending.” Another musical lover and LHS Senior Mary Nice, thought, “I have never been to a play on Broadway, but I would love to attend one this year even if we are not socially distanced.” Mary also brings up the point that she would not think it would be worth going if the actors and actresses had to wear masks. Thankfully, this is not the case.

As at any other time, some plays will not be coming back to the stage, though many will and new ones will be making their debut. Musicals coming to the stage this year include Mrs. Doubtfire, Diana, and Flying Over The Sunset. To read more about these newcomers go to the New York Times.  One of the legendary favorites of musical-goers, “Wicked,” is returning: a spin off of the Wizard of Oz, widely agreed to be  a magical performance. Some other fan favorites include The Lion King, Harry Potter and the Cursed Child, Hamilton, Aladdin, and Dear Evan Hansen. Some even claim that these shows are lifechanging.

The best part of going to a classic Broadway play is all the emotions it makes you feel and take in. Most will make you laugh, cry and smile all in one evening. It is surreal that we have gone without this kind of art for so long, and the fact that Broadway will be up and running again is a gift for those working in the industry, those seeking entertainment and lastly helping our economy. Hope to see everyone at the theater!