The Lafayette Ledger • May 25, 2021 • https://LafayetteLedger.org/18717/news/special-exhibition-opens-at-jamestown-settlement/

An overview of the Indigenous history exhibit 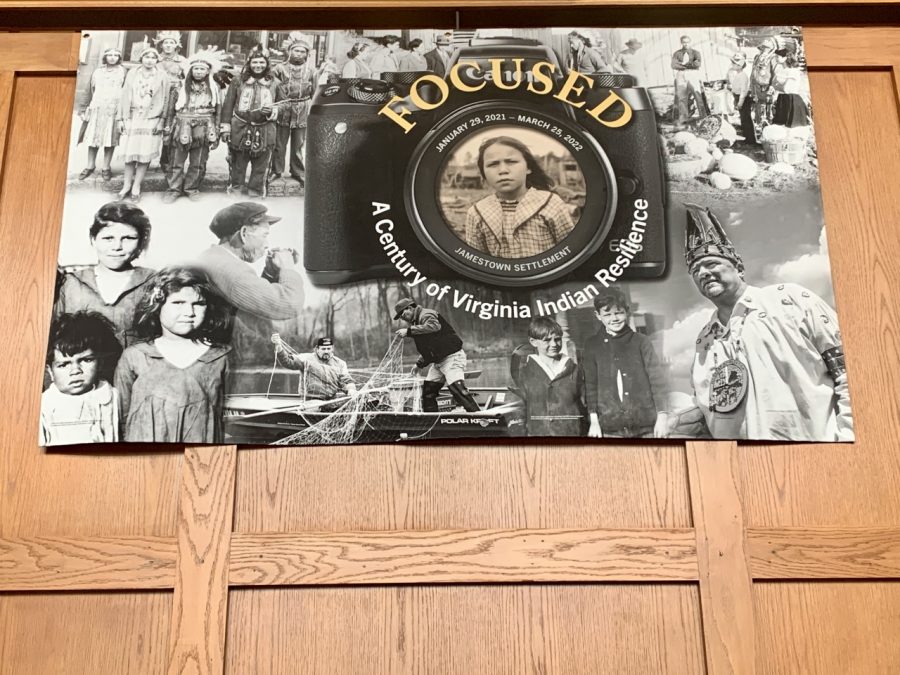 "FOCUSED: A Century of Virginia Indian Resiliency " is located within the rotunda of the museum. This banner displays some of the photos from the exhibit.

A look at the past and present of Indigenous tribes in Virginia, “FOCUSED: A Century of Virginia Indian Resilience” is a limited exhibit new to Jamestown Settlement this year. Through photographs, Indigenous artwork, and artifacts, the showcase details the history of several Virginia tribes during the twentieth and twenty-first centuries.

Primarily composed of photographs documenting the practices of Indigenous communities, “FOCUSED” features a collection from the National Museum of the American Indian and highlights the works of Frank Speck, A. Audrey Bodine, and Tracy Roberts. Pottery, quilts, and instruments are among some of the other pieces of art displayed. The Cheroenhaka (Nottoway), Chickahominy, Eastern Chickahominy, Mattaponi, Monacan, Nansemond, Nottoway Indian Tribe of Virginia, Pamunkey, Patawomeck, Rappahannock, and Upper Mattaponi are all represented within the exhibit.

Each area of the exhibit focuses on a different aspect of Indigenous culture in Virginia, including fishing, education, crafts, pottery, and powwows. Some highlights include a quilt made Gina Adams, an Ojibwe artist who has woven over forty of quilts with the words of broken treaties between tribes and the U.S. government. The quilt on display in the exhibit is a rendition of the Middle Plantation Treaty of 1677, made between Prince Charles II and Virginia tribal leaders. A turkey feather mantle from the 1930s made by Mollie Adams, an Upper Mattaponi tribal leader, is also on display in the exhibit. Another noteworthy aspect of the exhibit is the photography campaign “No More!” by Tracy Roberts, who created the project with the goal of spreading awareness about Missing and Murdered Indigenous Women.

The history of the 1924 Racial Integrity Act and its impact on Indigenous people in Virginia are center points of the exhibit. The act, as stated in the exhibit, “essentially created a two-race society in Virginia”. Under this law, people could only be recorded as “white” or “colored” on documentation. This led to the alteration of numerous Indigenous birth, marriage, and death certificates as well as tax and voter registration documents. Though the Supreme Court overturned the Racial Integrity Act in 1967, the documents still remained altered. At the request of tribes, some documents were changed back. However, the alteration of these important documents during the 1920s has made it difficult for Virginia tribes to be recognized on the state and federal level, a topic that is talked about in greater depth in the exhibit.

College of William & Mary professor, Andrew Fisher, specializes in Native American history and shared his thoughts with me after visiting: “I think the exhibit is important to help correct the mistaken assumption that Virginia’s Indigenous peoples no longer exist or are not ‘real Indians’ because they don’t look or live exactly like their ancestors did 400 years ago. The photographs and artwork on display show how Native Americans here have survived by creatively adapting to settler society and resisting efforts to erase their communities and cultures”.

For those interested in visiting, the exhibition is included in the price for museum admission. Currently, admission costs $18 for adults and $9 for children ages nine to twelve. Residents of James City County, York County, or the City of Williamsburg can receive complimentary admission if proof of residency is given. Parking is free. Museum hours are from 9 AM to 5 PM, seven days a week. Photography or videography are not permitted within the exhibit. “FOCUSED: A Century of Virginia Indian Resilience” will remain open until March 25, 2022.