Take a peek and see what Marvel's latest made for TV offering is all about! 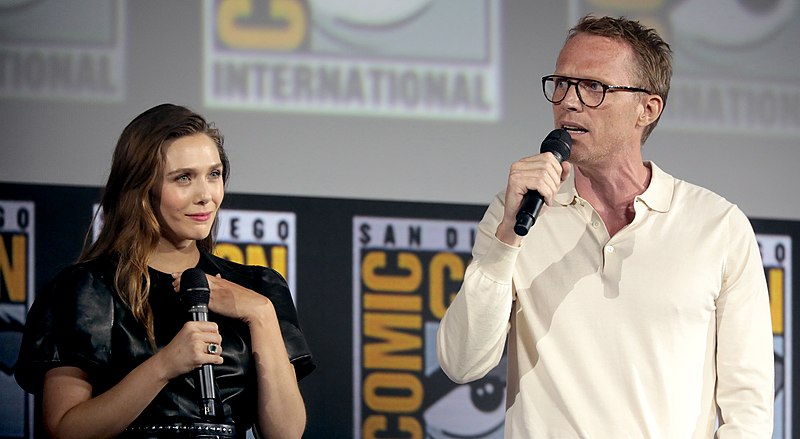 Olsen and Bettany at Comic-con talking about the show.

WandaVision is the latest release in the Marvel Cinematic Universe, and the first new Marvel TV show to be launched. It finished airing its 9-episode run earlier this month. The show begins by following Wanda Maximoff(Elizabeth Olsen), and her husband, Vision(Paul Bettany), in a classic 1950s sitcom style, but they begin to soon realize everything is not as it seems. The overall reception of the show seems to be positive, with an 8.2/10 on IMDb. Matt Shakman’s show brings a new genre to the pool of Marvel TV shows and movies, being a blend of an older sitcom, some of the classic Marvel action, with a little psychological horror blended in. WandaVision’s success so far can be attributed to the range of audiences that can enjoy it, with the sitcom-parody trope, coupled with the Marvel branding, and the action in later episodes. WandaVision was a different approach to what a Marvel TV show looks like, but coupled with the charm and chemistry of Bettany and Olsen, it made the show an enjoyable experience.

The two main stories being told are Wanda and Vision’s new marriage, being told through parody sitcom episodes that take place in a town called Westview in New Jersey, and the group outside of the town trying to understand the anomaly that is the town that is made up of Monica Rambeau (Teyonah Parris), Jimmy Woo(Randall Park), and Darcy Lewis (Kat Dennings). The first three episodes follow Wanda and Vision in parodies of classic TV shows like I Love Lucy and Bewitched. The first two episodes give us some exposition, and a good idea of how the characters are being portrayed in the show, but in the third episode, we get the development of Wanda being pregnant, and having twins named Tommy and Billy. In the comics, these kids would grow up to see them become Wiccan and Speed, but it’s unlikely that Marvel is going to pursue anything with them. We see quickly that Wanda has control over all of Westview, which she is using to cope with the grief of her robot-husband dying fighting Thanos. It doesn’t take too long for Vision to notice something is wrong, and he is slightly less than happy with his wife, as he sees her controlling the reality they are in, which is an unpleasant experience for the people she has control over.

He then decides to do some more investigating, when Wanda’s dead brother Pietro comes back, played by Evan Peters, the X-Men actor for Pietro. Spoiler-this doesn’t merge the two universes in a deal that would be a near monopoly on the superhero move industry. Rather, it’s Disney’s way of shoehorning in a character named Ralph Bohner, who is meant to be Agatha’s husband. Although it’s still highly likely that Disney will put the two franchises together in some way, they decided to wait on it, and no one can dispute the importance of the “Ralph Bohner” twist in the MCU. Although they may not have used

WandaVision to add whole new franchises to the MCU, they did use it to set up the upcoming Doctor Strange Movie, Multiverse of Madness. A fan of Marvel movies and TV,  Nathan Cummings said, “It was pretty good, and it did a good job setting up the new Doctor Strange movie.”

If there’s one thing to take away from WandaVision, its how much desperate MCU fans will grasp at straws for theories. Plenty of people were hoping that Mephisto, a demon in the Marvel comics, would be the main villain of the show, and looked for him to be hidden in plain sight. People speculated everything from Vision’s boss, to Agnes’ bunny Senor Scratchy, to him being a magical box. Some said that Hayward was Ultron, the original AI who wanted humanity destroyed, in disguise. Nothing was too absurd for the fans. For a TV series about a witch married to a toaster with a brain, I would say WandaVision was enjoyable, even though it could be slow at times. The genres were well mixed, so there wasn’t too much of the sitcom style, or too much action. My personal favorite episode was 6, the Halloween special. It gave an interesting look at what Wanda is doing to the townspeople. I would give the first half of the show a 7/10, and give the second half an 8/10.