It sounds weird and fake, but its real and better than anyone thought it could be 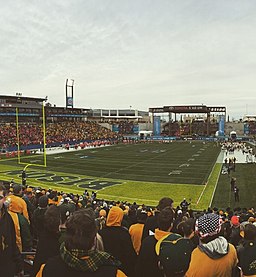 The Bison have started off slow this season but they hope to find themselves back here in the FCS Championship.

College Football is back, kind of.  In fairness, it never really left.  In a time where there would normally be spring practices and scrimmages, we a spring football season.  Almost all Division 1-AA schools are in the process of finally playing their season.  After four weeks of football, this season remains as unpredictable as ever.

52-24, that’s how everyone thought the college football season ended.  Alabama lifting the trophy again.  Ohio State walking off the field in a state of pure defeat.  But, it is 2021, and nothing has be normal or expected.  We get the gift we never knew we wanted or needed, football year round.  Sam Boyer, Lafayette player and avid football fan said, “It is great to watch college football in the spring because it gives off a year-round football vibe.  It gives me something to look forward to on weekends.”

FCS football is back to it’s entertaining ways with the defending national champions North Dakota State being knocked off by Southern Illinois 38-14.  No.1 James Madison had an early scare coming back from down 14 late in the third to be Elon 20-17 but have not played since.  William and Mary bounced back from a loss to Richmond following a 31-10 win in their home opener against Elon. They play James Madison on Saturday in Harrisonburg.  VMI is off to an impressive 2-0 start for the first time since 2005.  The Ivy League is among the few conferences who have decided to forgo a spring season in favor of playing in the Fall 2021 season.

The surprise of the season so far has to be the Deion Sanders led Jackson State squad.   Following a disappointing 2019 campaign and finishing 4-8, the Tigers are of to a strong 4-0 start and averaging 43 points a game under their rookie coach.

The defending National Champions of the FCS had a shock loss to start the season.  After playing a showcase game for QB Trey Lance, a projected first round pick in the 2021 draft, they were left as one of the few teams who played in the fall.  After watching the first game of the spring season, some began to wonder if their choice in the fall would come back to hurt them in the spring.  They have proven that game was nearly a hiccup an while their 39-game win streak is over, the Bison look poised to make another run this spring.

The defending Division II champions, West Florida, and Division III champions North Central College have both forgone a 2021 spring season in preparation of the fall season. The Argonauts from West Florida won their first national title after just four seasons in existence in 2019. North Central won their programs first national title in 2019 following a playoff run where they did not score less than 30 points and averaged over 45 points per game. Both teams will be looking to make their mark after nearly two years off at the start of the fall season.  Current Lafayette football player and North Central Commit, Reed Overton, was asked about looking forward to next season.  Overton said, “I am super excited to be apart of the North Central Football team!  I can’t wait to get the chance to play with them next season.”  Reed will not be alone as his future teammates have not played football in nearly two years.

Hampden-Sydney, Emory & Henry, and Randolph-Macon are all looking true to form as they are off to strong 2-0 starts to the season.  Bridgewater is off to a reasonable 2-1 start halfway through the season.  Guilford, Ferrum, Shenandoah, and Southern Virginia are all of to slow winless starts to the season.  Washington and Lee has yet to play a down of football this season.

Everything has changed this year. The Weather. The rules. The environment.  The Game.  This year has been one of the most challenging years in recent memory. Somehow, someway, we have almost all colleges play some form of a season.  These athletes have finally gotten their chance to play, and for some they are finally able to get their last ride.