The battle between Netflix and Hulu rages on. 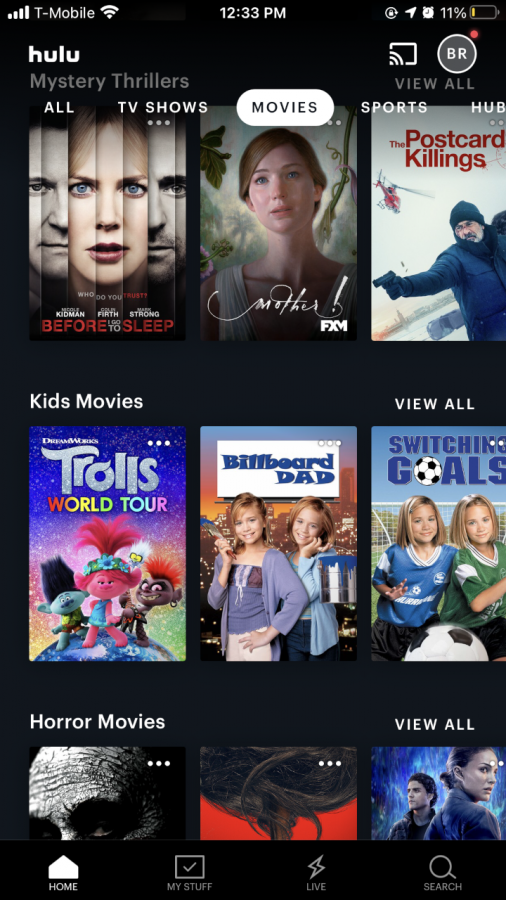 Hulu has 23 genres that you and your friends and family can enjoy. Ranging from kids movies, to crime, to even anime. Hulu and Netflix have most of the same genres, but Hulu has more creative options for you to choose from.

There has been an ongoing battle between Hulu and Netflix, two apps that you can download on pretty much any device which both offer a wide variety of shows and movies for you to watch. While some of my favorite shows, such as “The Vampire Diaries”, “Stranger Things,” “All American” and much more are on Netflix, Hulu has more of the reality tv shows that I watch, such as “The Bachelorette,” “Big Brother” and any of the HGTV shows. Netflix and Hulu have horror films, comedies, romance, action packed movies and just about any genre you could possibly want to watch. Though some would choose Netflix because there are no ads, some may choose Hulu because of the offers that they offer.

Hulu offers lots of subscription plans for everyone to enjoy. Starting at $5.99 is the basic Hulu subscription. With this, you are able to watch movies and tv shows. There is another plan called Hulu + that you could pay more money for that is $54.99. You can watch your favorite tv shows live and watch your favorite movies. Some of the most popular shows on Netflix right now are “The 100,” “The Haunting of Bil Manor,” “Ratched,” and “Away.”

Lauren Adam, a student at Lafayette, had some thoughts on whether she liked Hulu or Netflix more.  She said, “Lately I have been watching more Hulu because there have been more shows that I like on there. Netflix was better in the beginning but it kind of died down because they weren’t putting anything new on there.” She laughed and then said, “I have also had Netflix forever so I’ve watched just about everything that I can on it.”

Netflix offers three subscription plans: basic, standard, and premium. The basic streaming plan starts at $8.99 a month and has a good variety of limited features but you are only able to watch from one screen at a time. The next best subscription plan is the standard. With standard you are able to watch on two screens at a time in High Definition (HD). The premium plan is best for large families because you are able to stream on four different devices at a time. This subscription costs $15.99 a month. The top trending shows on Hulu are “Parks and Recreation,” “The Bachelorette,” “This Is Us,” and “What We Do in the Shadows.”

A lot of people have both Hulu and Netflix so that they can have lots of things to watch. When they get tired of one, they can just go to the other. Hulu offers more of a variety of reality tv shows, tv shows that are still running, and comedies, whereas Netflix offers more horrors, tv shows that aren’t running anymore, and more shows for the kids to enjoy. If I had to pick between Netflix and Hulu I would probably pick Netflix because some of my favorite shows are on there.