The Value of Wilderness

A walk through the wilderness in spiritual intent opens your third-eye. 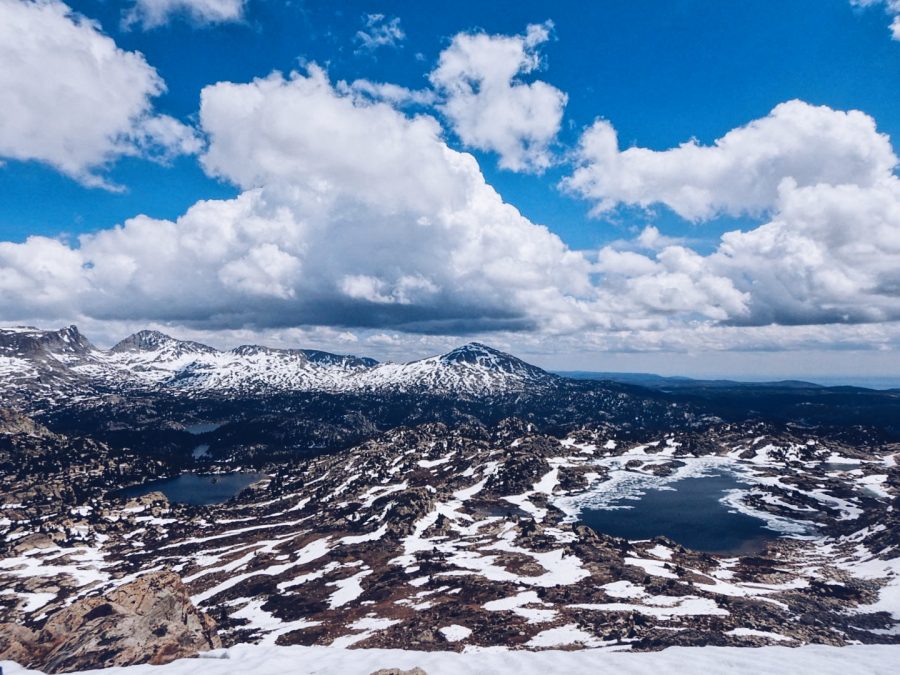 Healthy forests, moors. and floodplains have a balancing effect on the extreme weather patterns of climate change and permanently reduce carbon dioxide. They give creatures space and time to adapt to new climatic conditions.

Our psychological roots, our modern physical composition, everything we are, stems from our primal ancestors enduring the unpredictable yet absolutely thrilling wild. However, the evolution of humans has shifted our typical way of life in practically every aspect. How humans use their brains to react to their environment and how the environment transforms as result of humans is the basis our constantly modulating society- which in turn, directly affects the conditions of where our society physically resides: beautiful plant Earth.

The author of Into the Wild, Jon Krakauer, noted in his novel, “I wished to acquire the simplicity, native feelings, and virtues of savage life; to divest myself of the factitious habits, prejudices, and imperfections of civilization;.. and to find, amidst the solitude and grandeur of the western wilds, more correct views of human nature and of the true interests of man The season f snows was preferred, that I Might experience the pleasure of suffering and the novelty of danger.” –Estwick Evans, A Pedestrious Tour, of Four Thousands Miles, Through the Western States and Territories, During the Winter and Spring of 1818.

Over the 6 million years that humans have walked this planet, we have successfully, yet unfortunately, completely industrialized the once natural and pure state of Earth. Instead of continuing to adapt to our given environment, we used our perpetually evolving and arguably malicious brains to instead, adapt the environment to us. Essentially everything we rely on today pollutes the earth in some way- whether its coming from the exhaust in our cars, or tracing all the back to where material products were made in a factory, every item has a contribution to this epidemic. Humans can no longer live off of the land.

The 2019 best tent for backpacking, according to backpacker.com, is the Big Agnes Scout Two Platinum. Weighing only one pound, this tent is great for two people.

The concept of wilderness is truly a phenomenon and in all honesty a paradox. What is true ‘wilderness’? Because of the fact that wilderness today has to be intentionally preserved and regulated by the government, subsequently contradicts its entire purpose of being ‘wild’. How could something with solely origins of purity and freedom be stripped of its core values by federal jurisdiction, yet still be considered unchanged in its absoluteness by society? While government interference is the only force behind having a strong influence on keeping what ‘wilderness’ we have left as beautiful and sustained as possible, it does indeed raise red flags on what we consider to be important in our society. Having to have laws in place to protect the national parks and forests obviously illustrates how there are malevolent minds out there who are intent on destroying them for industrial and finical purposes. Even though there will never be an instance where all humans agree on a particular matter, it truthfully is sickening what this foreshadows for the future of Earth. Wilderness shouldn’t have to be political, much less a controversy in its preservation; it should be respected by all–for it is the entirety of our planet and humans are merely an asset. Our selfish and controlling nature will be our inevitable downfall.

Skylar Smith, a student at Lafayette High School, claims her stance on the importance of preserving what natural world we have left. “My family and I have always spent an incredible amount of time outdoors and have always greatly valued nature. It is disgusting to see Trump try and destroy various National Parks and Forests–its the only protected wilderness we have left! There’s an indescribably wonderful feeling when it comes to being in the great outdoors, it would be heartbreaking to see that be taken away.” 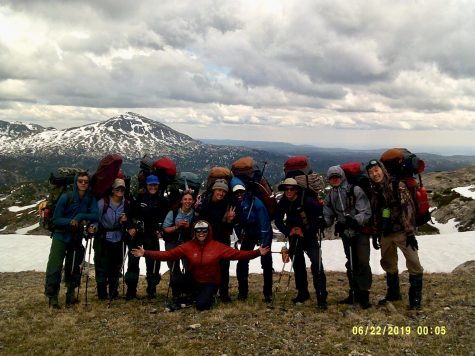 As a mission-driven institution, NOLS (National Outdoor Leadership School), is the leading source and teacher of wilderness skills and leadership that serve both people and the environment.

Water like this is extremely dangerous, the body loses heat twenty-five times faster in water than it does in air.

Having claimed the extraordinary value of nature, my recent personal experience with the wilderness only engraved its abiding allure onto the surface of my heart even more so. This past summer, I walked with 8 former strangers, now my best friends, in the midst of the daunting yet unquestionably breathtaking Rocky Mountains for 31 days, with the company NOLS. Specifically, we hiked the Wind River Range, which stretched its rugged peaks, carved by glaciers, and bone-chilling, deep blue lakes over 100 miles. Throughout the month I spent in the field, I became the best version of myself I could ever ask for. I’ve come to know a side of myself that would have never been discovered if it wasn’t for the opportunity I was given and the chance I took. I decided to conquer this venture 4 days before the group left for the Winds; I had been dealing with various mental issues and needed to feel alive again- and I knew right away, just by imagining the crisp mountain air, total isolation from society, and the feeling of utter freedom from outside world responsibilities, that this trip would immediately lift my spirits to a height I’ve never reached before.

My group and I endured many challenges while hiking through the merciless terrain: on the side of a mountain–waist-deep in snow with every step, running out of food for three days, horrifying night storms (which blew the tent around and ripped off the rain fly), body parts burning from the intense elevation and 60 pound packs, not having my asthma inhaler in the thin mountain air–everyday something new.  However, even having to undergo countless painful trials, never did I feel defeated. Never did have any inclination of quitting or letting negative thoughts flood my mind. This was something new for me; in the outside world I let negative thoughts cloud my head and influence my every-day actions. Something about the simplicity of surviving in the endless and mysterious complexity of the wilderness brings such a humbling and freeing sense to 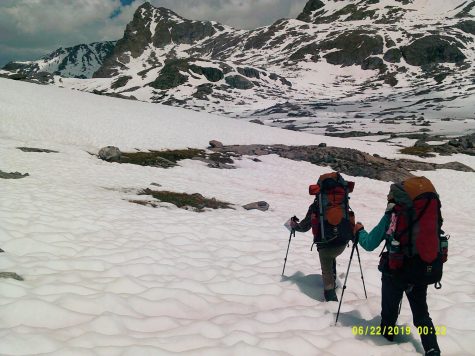 the mind. It feels right. From the deepest part of my psyche, my external being, and with everything I am, the omnitude of nature feels meant to be. I felt one with all of the experiences I had in the mountains, especially the challenges– whereas I normally would feel as if there was an opposition–something inhibiting me from enjoying many parts of my life; but soon I realized the only opposition I was previously faced with was my toxic train of thought. Its amazing how the way you think influences your entire perspective on every little detail. The fact that nature subconsciously led me to being nonjudgmental of situations, and appreciating them for what they are, is why I feel such an unconditional love for it, and now for myself as well.

While surrounding ones self with nature is healing to many, Joey Sims, another student at Lafayette High School, comments on whether or not he would endeavor a 30 day NOLS course if given the chance. “I honestly don’t think that I could. Not having my phone and being completely isolated in the woods would really stress me out. I feel secure and at peace when I’m connected to the outside world.” Joey’s claim is testimony to how humans and society have evolved into a technologically and communally dependent world. Though there is nothing objectively wrong with his stance, the constructs of our technologically advancing society is directly related to growing industrialization, which in turn battles the little protected wilderness we have left. 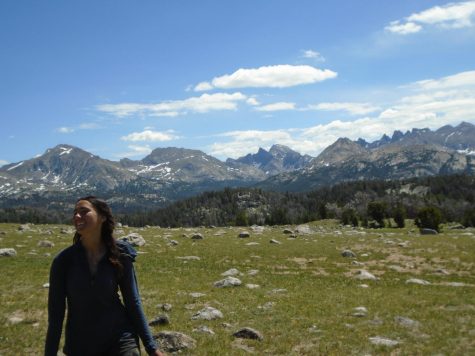 Wilderness, as defined by the Wilderness Act, retains its primeval character — land where “the Earth and its community of life are untrammeled by man, where man himself is a visitor who does not remain.” Sept. 3 marks the 40th anniversary of the signing of the Wilderness Act, the landmark federal legislation that preserves more than 105 million acres of wild land throughout the United States.

Previously I mentioned the paradox of wilderness in the world today, and how it’s ideals of liberation and nature is conceptually obstructed by government mandating. Towards the middle of my expedition, I had really begun to ponder this inescapable enigma. Although it was an uncomfortable feeling at first, thinking as if I wasn’t actually surrounding by true, unregulated wilderness; as if the fact that the government owned this National Forest made it less of a freeing and isolating place, as if the mountains and rivers were less beautiful–I soon realized the idiocy to my affliction over this matter. Instead of spending the time in my head replaying the perplexity over and over again, I simply acknowledged that just my strong awareness and passion concerning the subject was enough. There wasn’t a need for obsession. There wasn’t a need for continuously overthinking the same thing; thoughts are thoughts and nothing more. Enjoy the present moment for what it is-regardless. I didn’t want to catch myself gazing off into the vast mountain range at sunset thinking about how the government owned it anymore. Spending time anxiously consumed in the over-analyzation of anything naturally distracts one from the beauty that’s right in front of them.

Being completely conscious of the way I approached the external world from my internal being was unquestionably the most valuable takeaway I received from my experience in the wild, and it plays a role in every single second of my life to this day still. Without further explanation, one should recognize the power of returning to the roots of man for the betterment of themselves and the perception in which they see the world around them– for they are one in the same.

Jon Krakauer, with his unwavering passion for the natural world, went on to note, “Wilderness appealed to those bored or disgusted with man and his works. It not only offered an escape from society but also was an ideal stage for the Romantic individual to exercise the cult that he frequently made of his own soul. The solitude and total freedom of the wilderness crated a perfect setting for either melancholy or exultation.”–Roderick Nash, Wilderness and the American Mind.