Disney's latest movie, "Maleficent Mistress Of Evil," is the next installment of Disney's wonderful re-imagining of a fairy tale villain. Get ready to see it by reviewing the first movie with us now! 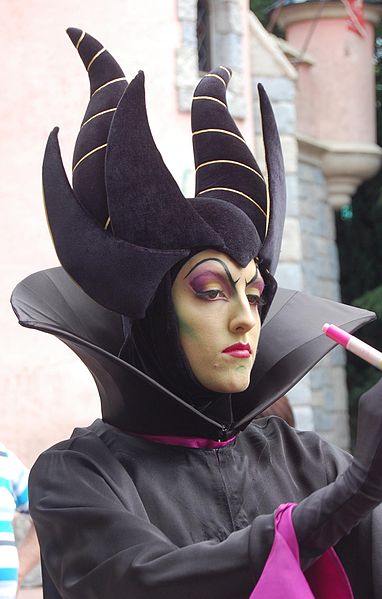 A young lady dresses up as Maleficent at Disney World.

In 2014 Disney came out with a new movie called “Maleficent,”  based on the villain from their classic “Sleeping Beauty.”  Their continuation of this saga has just been released, but to understand it you have to know the story of the original reinterpretation of the classic fairy tale story.

An imaginative and sympathetic retelling of the misunderstood queen’s story, this film introduced audiences to a curse that’s broken by true love’s kiss, an evil king, a misunderstood “monster,” and a land filled with magic and wonder.

Maleficent is a fairy with enormous brown wings and big horns. Although she might look weird or scary, she is a friendly being who lives with other “strange” creatures. They all live together in the Moors, a magical forest bordering the human kingdom. The movie begins when Maleficent is a child. The castle where she lives is full of life and beauty. One day, Maleficent finds a farm boy who is stealing jewels from their land. Although the boy was scared of her, she assured him that no harm would be brought upon him. This farm boy was the first human Maleficent had ever encountered. Maleficent and the farm boy, whose name was Stephan, soon became friends. Years passed and their friendship grew, and on Maleficent’s 16th birthday Stefan kissed her, telling her it was true loves kiss.

More time passed, and the King of the humans planned an attack on the Moors. They defeated the King’s army and caused them to retreat, in the process injuring the King. The King was now dying and told his people that whoever killed the powerful fairy, Maleficent, would be crowned king.

Stephan, who had lived his whole live in poverty, heard this and went to see Maleficent for the first time in years. When he arrived, he was greeted warmly, and they began talking.  Suddenly, he poisoned Maleficent, and almost killed her. He wasn’t able to kill her, finally feeling some emotion, but instead cut off her wings to bring to the King. She wakes up that morning with overwhelming pain in her back, screaming and crying out in pain. The worst pain of them all though, was the pain of the betrayal of the man that she had once loved. The Moors, which were once beautiful, soon became dark and depressing, outwardly expressing Maleficent’s emotions. Since her wings were gone, she found a raven and turned it into a man, so that she could have some aerial view. This bird was named Diablo, and he became Maleficent’s servant.

After some time, word spread that King Stephan was having a baby and would be holding a christening. Although Maleficent wasn’t invited, she went to the ceremony. While blessings were being bestowed on the baby, Maleficent interrupted. She questioned Stephan about what he had done to her and why. King Stephan didn’t answer these questions, and instead banished Maleficent.

She left the christening, but before leaving she put a curse on baby, who was named Aurora. The curse said that on Aurora’s 16th birthday, she will prick her finger on a spinning wheel and fall into a sleep like death that only a true love’s kiss could break.

King Stefan banned all spinning wheels that night. The spinning wheels were put in the deepest dungeon in the castle in order to protect Aurora. He then sent Aurora to the Moors to live with three pixies, the same place that he had grown up. They were to raise Aurora until her 16th birthday had passed. These pixies, who lived in a little cottage, disguised themselves as humans and hid Aurora from Maleficent.

However, Maleficent watches over Aurora the whole time, protecting her. One day, Aurora is playing in the Moors and almost falls off of a cliff. Maleficent saves her and takes her to her castle. Aurora tells Maleficent that she knows she was always watching over her and keeping her safe. Maleficent returns Aurora, but continues to bring her to her castle. She feels terrible about putting the curse on this child and attempts to lift the curse, but isn’t successful.

Time passes and Aurora is almost 16. Aurora asks Maleficent if she can come live with her once she is old enough. After telling the pixies what had happened, they decided to tell Aurora about her past and what the evil fairy had done to her. She immediately goes to the castle to see her father. Upon seeing her, Stephan has her locked away so that she cannot touch a spinning wheel. However, Aurora finds a hidden door, and is led by voices in her head down to the dungeon.

She sees the spinning wheels and the voices guide her to it. She pricks her finger on the needle of the spinning wheel and falls into a deep sleep. Maleficent hears this and finds the prince that Aurora has fancied, but his kiss doesn’t do anything. Maleficent and Diablo enter the room and she starts to cry, kissing Aurora on the forehead.

Suddenly, Aurora woke up from the deep slumber that she had been in. Together, they try to escape the castle, but Maleficent is trapped by an iron cage that falls over her. Aurora runs into a nearby house and finds a box with Maleficent’s wings. She tips the box over and the wings fly off to find Maleficent. Maleficent manages to get out of the chains and the wings connect with her. After a great battle, they defeat the king’s army. The king makes one more attempt to kill Maleficent but fails, and falls to his death. Aurora is crowned the Queen and she and Maleficent unify the two kingdoms, the Moors became beautiful again, and everyone lived happily ever after.

Now that you’re up to date in this magnificent re-telling which shows that sometimes villains are simply misunderstood heroes, go see “Maleficent: Mistress of Evil,” in theaters now!